This section of the website contains a wealth of information on what arthritis is, how to identify arthritis in your dog, and what it can mean long-term. 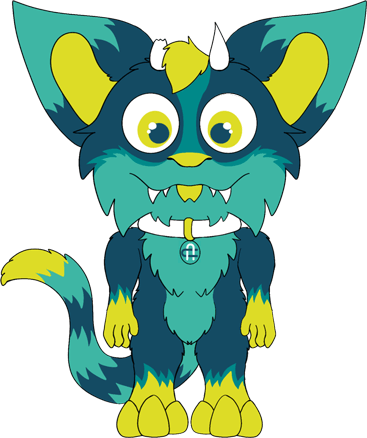 Arthritis is commonly and mistakenly described as a disease of the cartilage of a joint.

Osteoarthritis (OA) is the most common cause of chronic pain in dogs. It affects 80% of dogs over the age of 8 years old, and potentially up to 35% of dogs of all ages. It is considered a welfare concern in companion animals such as dogs, especially if left untreated.

Arthritis is often considered to be a disease of old age, however unfortunately it can occur in dogs of any age. This is due to the fact that developmental joint disease, which is a disease of younger dogs, is the leading cause of arthritis. Developmental joint disease results in imperfectly fitting joints and subsequent early onset degenerative changes. These changes progress to arthritis, resulting in painful, immobile, and grossly abnormal joints.

Arthritis simply means “inflammation of the joints”, but in truth the disease is much more complex than this.

Arthritis is commonly and mistakenly described as a disease of the cartilage of a joint. It is in fact a disease that affects all structures within the joint, and if left unmanaged, it can lead to complete joint failure.

Cartilage within the joint is destroyed and not replaced during the degenerative process of arthritis. The inner lining of the joint capsule becomes inflamed, and the outer fibrous layer becomes thickened and restrictive. The normally nutritious, viscous joint fluid thins and loses its viscous support for normal joint motion. New bone is laid down around the joint margins and the bone underlying the cartilage remodels, thus losing its ability to absorb concussional forces. The supportive structures such as ligaments local and distant to the joint weaken, leaving the joint unstable and weak.

Throughout the above degenerative process, the nerve receptors within the bone and joint capsule convey messages of inflammation and tissue damage to the brain. These receptors not only increase in number, but also fire off messages to the brain more easily.

If this process is left unregulated, we will eventually see a process called “wind up” where the brain becomes increasingly aware of the pain signals coming from the joints and magnifies them so what was initially a low level of pain is now perceived as a lot of pain. 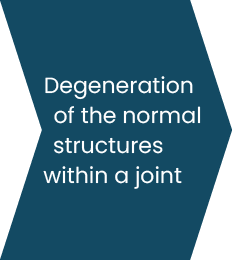 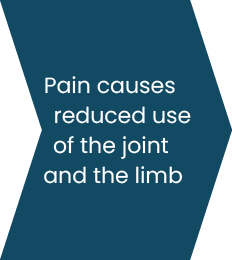 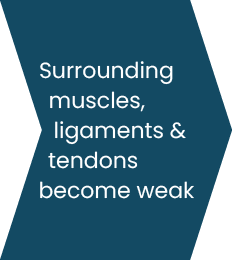 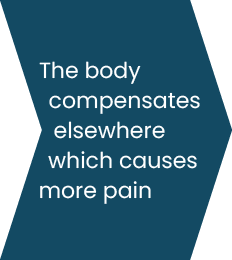 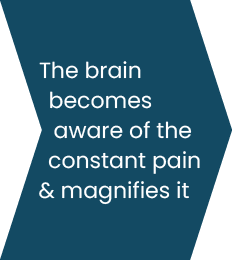 Arthritis and the pain it creates do not remain confined to the affected joint and local area. Due to weight shifting away from the affected joints, these limbs are ‘off-loaded’ and weaken in strength and function. Other regions of the body are recruited to carry more load to compensate for the off-loading. For example, a dog with painful and weak hind limbs will carry less weight through them to avoid pain, shifting this weight carriage into the forelimbs. The lack of use of the hindlimbs will lead to less propulsion and stability. The dog’s back, forelimbs and neck will work hard to compensate and maintain the dog’s mobile independence. Over time this can lead to secondary issues within these structures which also cause pain dysfunction.

The continual barrage of messages of pain reaching the dog’s central nervous system can have further negative consequences. The nervous system remodels itself to improve the efficiency of these pain signals reaching the brain, to the point it may initiate signals of pain irrespective of what is happening in the joint. This is called central sensitisation and can be simplistically interpreted as the pain of arthritis ‘budding’ off the original disease within the joint, and effectively becoming its own disease. Once this occurs effective pain management must address both the original source - the inflamed arthritic joints - as well as the hyper-reactive nervous system. This is likely to require multiple simultaneous medications and/or therapies. The phenomenon of central sensitisation makes effective disease management more complicated.

Arthritis can, and often does, affect more than one joint. It is considered a secondary disease in dogs because the leading cause of the condition is developmental joint disease, such as elbow dysplasia and hip dysplasia. Certain breeds are more likely to develop arthritis than others due to genetic predispositions. In dogs the most commonly affected joints are the hips and elbows, however any articulating joint can be affected and cause great discomfort to the patient.

Osteoarthritis is an inflammatory disease but should not be confused with immune mediated arthritis or rheumatoid arthritis. The former is when the body’s immune system attacks its own joints, and the latter is when there is an infection within the joint. Ultimately these conditions will lead to osteoarthritis to varying degrees as well.

Unfortunately we can’t yet cure arthritis, however there is a lot that we can do to manage the pain it causes and give dogs that suffer with arthritis a better quality of life. 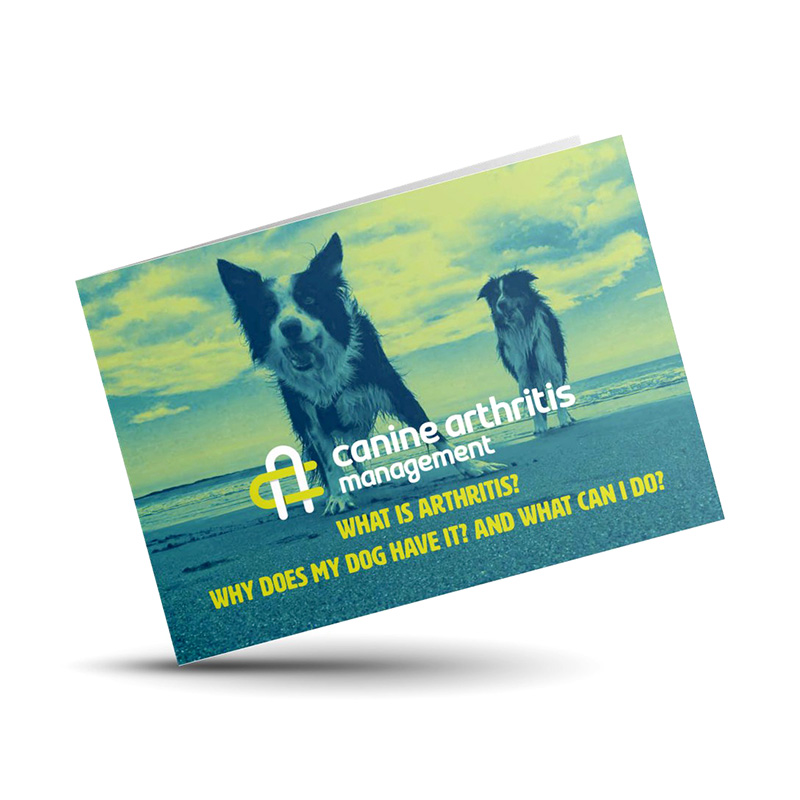 CAM HAS A BOOKLET DESIGNED TO HELP!

You can purchase CAM’s ‘What is Arthritis?‘ booklet from the CAM online Shop in print or digital format.

Or why not join our CAM MEMBER ZONE where you will gain access to all our CAM booklets in digital format as well as a wealth of information, videos, downloads, forum and much more...

other types of arthritis

Arthritis simply means inflammation of the joint, but there are different kinds and should not be confused as each requires a different treatment. A thorough examination by your vet will ensure a correct diagnosis for the best long-term results.

This is the most common form of arthritis, and the eventual outcome of the other types listed here. Also known as degenerative joint disease (DJD), it has many causes such as poorly formed joints (joint incongruity), developmental defects (e.g. osteochondrosis), trauma, instability (e.g. cruciate ligament rupture) and is very prevalent with 1 in 5 dogs suffering from it.

A key factor in its progression is the slow destruction of the articular cartilage of the joint, and other associated degenerative changes in the joint fluid and capsule and underlying bone.

It is often considered to be a disease of old age but in fact can be seen in dogs of all ages. Good management of our young dogs (e.g. care with amounts and types of exercise, good weight control, appropriate home environments) could have a huge impact on the likelihood of dogs developing severe arthritis as they age and we need to be considering how we care for our dogs joints from being a puppy right through to their senior years.

This is commonly confused with osteoarthritis, but is a very different condition. The disease is a very destructive/erosive form of arthritis driven by the body’s immune system affecting major limb joints. The exact cause of the immune system targeting the joints is still not clear. It is generally associated with a fever, a more severe generalised stiffness, and multiple symmetrical joint involvement.

Over time the damage to the joints is so great that they become unstable and grotesquely abnormal to the eye.

This is a very rare condition similar to immune mediated arthritis described above, however it affects other systems within the dog’s body too, such as the kidneys, the skin, the nerves and brain. It is uncommon but should be considered in a dog showing significant signs of arthritis plus other disease processes.

This form of arthritis is due to an infection, often bacterial, within a joint. It is caused by a penetrating injury, joint surgery or spread from the local area (e.g. the skin). It commonly affects a single large joint and the onset is sudden and severely painful. The joint is generally swollen and hot to the touch. This will lead to severe OA if not identified and treated promptly. 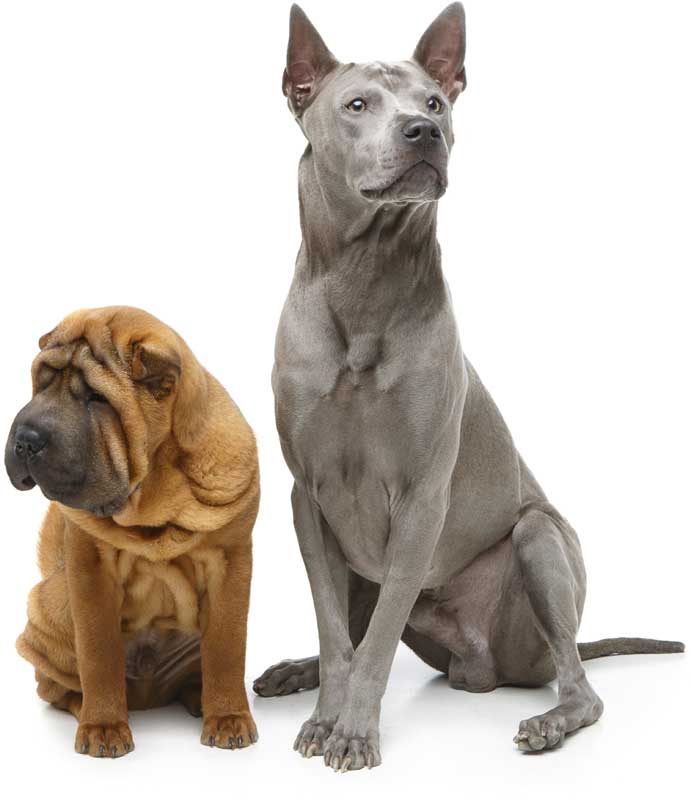 THE JOINT CAN BE CONSIDERED AS AN ‘ORGAN’ WHERE ALL COMPONENTS OF THE JOINT ARE AFFECTED BY THE DISEASE PROCESS.